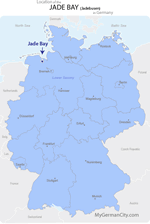 On the North Sea Coast, and part of the Wadden Sea National Park, is Jade Bay. You might hear it called by other names, like Jade Bight, Jade Estuary, or, more likely, Jadebusen (German).

No matter how many names it goes by, this 190 square kilometer bay (created by storm floods in the Middle Ages) is lined by a few great seafaring towns, lighthouses, and even a saltwater bog.

Other than the North Sea, where do you find this slice of aquatic heaven?

Easy, right between the Weser Estuary and the East Frisian Islands. In case you’re looking on a map, find Wilhelmshaven — and you’re right there.

Interestingly enough, the Jade Bay was said not to be a good natural harbor, but the High Seas Fleet of the Imperial German Navy was based here in Wilhelmshaven. Maybe they fell in love with the swampy area. It’s where you’ll find the only saltwater bog in all of Europe.

Forget the big city right now, Varel is where you’ll want to go along the Jadebusen too. It’s 32 districts are mainly for agriculture — yet it’s big on fishing and lobster because of its location along the water.

Varel’s got a 5-story high 19th century windmill, a 9th century church, and a nature reserve that’s a sanctuary for orchids. Yes, they need one — they’re quite delicate, ya know.

It’s also where you’ll find the Lighthouse Arngast. This totally cool lighthouse is 36.9 meters tall, and totally out of the water come low tide. So, that’s how they built it over the site of a former church. ;-)

You can get to the lighthouse from the town of Sande, too. But, you might be a bit busy traveling along the Frisian Army Way that’s 400km long. As pretty as you’ll find Jade Bay, Sande’s art sculpture trail is lovely in its own right.

From Sande you can choose to leave the Jade Bay, this is where you can pick up the Ems-Jade Canal that’ll take you towards Emden and the Dollard Route.

Bockhorn also lies along Jade Bay, and the town’s most famous for its annual Classic Car Show in June (we Germans love cars, don’t we?), and the Soapbox Derby that’s held the second weekend of every September (we Germans love tradition too, don’t we? ;-).

The Jade Bay of today might not look like it once did even just a few hundred years ago (with all the peat harvesting, it’s bound to happen), but it’s still a cute body of water (surrounded by some great towns) no matter what anyone chooses to call it.