The Wolfenbüttel District sits in Lower Saxony‘s southeastern corner, separated into two distinct parts by the district-free city of Salzgitter. Though divided, the district is unified in its reverence to the past and optimistic outlook to the future. 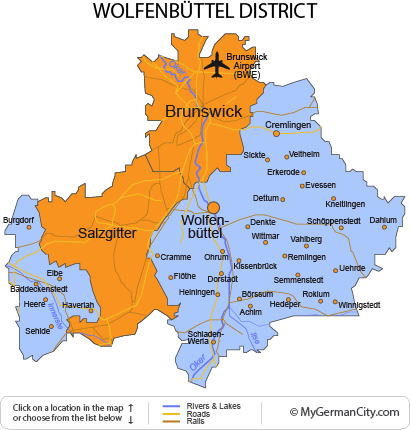 Towns & Villages in the Wolfenbüttel District

The district capital, also called Wolfenbüttel, is a large town on the Oker River just south of Brunswick (Braunschweig). Its history spans almost nine centuries. Major sights for you to see are the Herzog August Bibliothek, one of the largest libraries in the world, and the town’s huge baroque castle, which now contains a local museum you can visit.

Go to Hornburg (nowadays part of Schladen-Werla) to see its stately castle, rebuilt in the 1920s on the site of the 11th-century original. Or head to Börßum to tour its museum of historical railway vehicles. And in Cremlingen, you can enjoy hiking, biking, swimming and horse riding, or shopping and dining to your heart’s content.

It is no secret that the people of Wolfenbüttel love to eat. The town of Schöppenstedt, for example, takes particular pride in its Schlachterplatte, or “butcher’s plate,” featuring loads of meat and hearty sausage — one of the area’s specialties.

In fact, you could easily spend your entire stay in the district just sampling the sausage variations you come across. Try some with the local asparagus and wash it down with frothy cold beer. What could be better!