During the 18th century, the district of Ludwigsburg was at its absolute greatest. Bordering Stuttgart, in this period the royal household moved between the cities of Ludwigsburg and Stuttgart and this area reflects the splendor of such times. 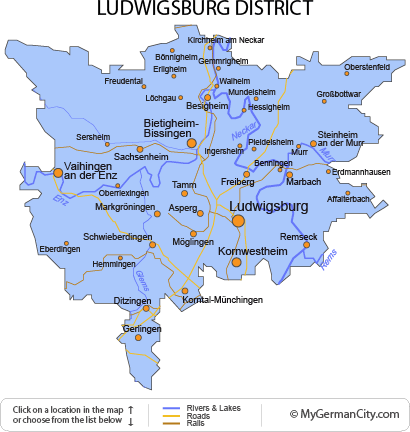 Ludwigsburg is home to one of the greatest Baroque castles in all of Germany, known as the Ludwigsburg Palace. Huge in stature and benefiting not only from an enormous formal garden but also two smaller palaces, this place really has to be seen to be believed.

Indeed, Casanova allegedly referred to Ludwigsburg Palace as one of the most magnificent buildings in Europe! :-)

If that weren’t enough to whet your taste buds, Besigheim is one of the best preserved medieval towns found anywhere with its defensive wall still standing, and its town hall filled with original murals and a stucco ceiling.

Lastly, up on a hill you will find a medieval watch tower known locally as the “Flour Sack” from which soldiers would once protect the town below.