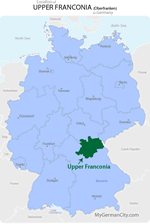 The only difficult aspect of vacationing in Upper Franconia (Oberfranken in German) is deciding how best to spend your time!

One way to get a taste of everything here is to visit each of its major cities, Coburg, Bamberg, and Bayreuth. Traveling between them will ensure that you take in the enormous diversity of Upper Franconia’s countryside as well!

Bamberg, spread over seven hills at the confluence of the Rivers Regnitz and Main, has the honor of being Germany’s “Capital of Beer.” Upper Franconia has the world’s greatest density of breweries, and Bamberg is home to nine of them. Bamberg’s smoked beer (Rauchbier) at the Schenkerla is not to be missed, but there is far more to this town than its beer gardens!

Fifteen museums and a UNESCO World Heritage Old Town will keep you busy, as will each of the churches (Michaelsberg Abbey in particular) crowning its seven hills. Emperor Henry II and Pope Clement II are buried in Bamberg’s 13th-century Cathedral. Bamberg is also surrounded on three sides by some of Germany’s top natural attractions. To Bamberg’s west is the Steigerwald Nature Park; to its north, the Hassberge, and to its east, the majestic Franconian Switzerland.

Following the Main Cycle Route from Bamberg to Bayreuth, you’ll curve north and east toward the Coburg/Lichtenfels area. For more than two centuries, basket weaving has been a major source of income for the town of Lichtenfels. Arrive there for the Basket Festival during the third week of September, and you’ll be astounded at how far beyond traditional baskets the art of basket weaving can go!

North of Lichtenfels is Coburg, where life revolves around the Marktplatz, with its 16-century Town Hall. In the Marktplatz is a statue of Albert von Sachsen Coburg-Gotha, better known to the world as Queen Victoria’s husband, Prince Albert. After Albert’s untimely death, Victoria paid several visits to Coburg, staying at the Ehrenburg with its view of the Schlossplatz. The Ehrenburg’s ballroom ceiling is supported by a group of giants!

Coburg is also the site of the fortified Veste Coburg, which looks out over the city from behind a triple ring of walls. Martin Luther lived in the Steinerne Kemante building for several months in 1530, but there is no record indicating that he dined on Coburg sausage during his stay. You definitely should!

The third of Upper Franconia’s major cities, Bayreuth, may have been established in the 12th century. It was more or less ignored, however, for nearly 700 years until Richard Wagner put it on the map. Bayreuth celebrates Wagner each year during the months of July and August with the Festspiele a.k.a. Wagner Opera Festival. It’s held at the opera house he built in 1876.

Wagner and his wife are buried here close to the grave of Franz Lizst, who was Wagner’s father-in-law. Also worth a visit is Bayreuth’s baroque Old Palace (Altes Schloss). It includes a Japanese room, an unforgettable mirror room, and a unique Cedar Room in which the Festspiele is officially opened each year.

South of Bayreuth is Upper Franconia’s (and one of Germany’s) most scenic regions, dubbed “Little Switzerland” for its upland terrain. This National Park has some impressive crags, carved over the eons by the River Weisent, which invite rock climbers from around the globe. There are also nearly a thousand limestone caves, including the fascinating Devil’s Cave, or Teufelshöhle, near Pottenstein.

Franconian Switzerland has its own network of hiking and biking trails, and an extremely popular “Hiking without Baggage” program.

Finally, what beer is to the rest of Upper Franconia, cherry liqueur is to Franconian Switzerland. According to the Guinness Book of World Records, this little piece of Germany grows more sweet cherries than any other place in the world, and they all have to go somewhere! ;-)